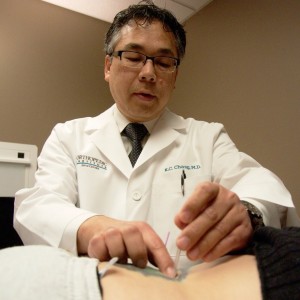 By any measure, Dee Larson and her husband Dale lived a pretty good life. Dee was an executive assistant. Dale was a pharmacist.  With two grown children, doing very nicely in distant cities, Dee and Dale regularly played golf together. When they weren’t golfing or socializing, they traveled to warm and sunny places on land and enjoyed the occasional cruise.

But about 10 years ago, something happened. Dee noticed her legs were tired and thought something was happening to her nerve endings that made her feel like something was crawling in her leg. Sometimes it felt like pins and needles.

It was disrupting her sleep. “I was tossing and turning constantly,” said Dee. “It was affecting my husband’s sleep, too.”

For those who don’t recognize these symptoms, Dee suffered from what is known as “restless leg syndrome” or RLS.  It affects about 10% of the population, mostly women in their 50s, and is a neurological condition characterized by unpleasant and painful sensations, like those Dee experienced, and an irresistible urge to move the leg. Maddeningly, lying down activates the symptoms and, left untreated, RLS can cause fatigue and exhaustion, impair memory and concentration, and make travel difficult. Dee did seek treatment. “I tried every kind of medication,” said Dee. “But I didn’t like how they made me feel—and they didn’t help that much.” But there was something worse. “I had terrible dreams.” Her life was becoming a nightmare.

Dee stopped taking medicine and found a surprising treatment:  acupuncture.   And it worked.

Life, as it happens, takes unforeseen turns and sometimes what you need is unexpectedly at hand.  Dee set up an appointment for acupuncture with  K.C. Chang, MD, a physiastrist specializing in non-surgical treatment of the spine at Orthopedic Institute. Twenty five years ago he integrated acupuncture into his practice.  He is one of a few medical doctors practicing acupuncture in the state of South Dakota. Dr. Chang, who has treated about 20 patients for RLS began to treat her.  Dee said things got “progressively better with each session until I felt I didn’t need it anymore.”

Indeed, one day, no more pins and needles. Which is ironic since acupuncture uses needles to stimulate “meridians,” or energy pathways, in order to modulate the neurological states that apparently cause RLS. Ironically, later, after Dee had knee surgery, the RLS returned. Again: Dr. Chang and acupuncture to the rescue.

Once again, life is good.